Depression, or Major Depressive Disorder (MDD) is a mood disorder that affects 2-6% of the population in most countries. It can present with mild, moderate, or severe symptoms, all of which affect daily life and interfere with the patient’s working ability, relationships, and quality of life. The more severe the symptoms, the more depression interferes with the person’s life.

How is depression treated?

Currently, there are a number of different treatments available for patients with depression. The most common ones include 1) Pharmaceuticals (antidepressant medication), 2) Psychotherapy, and 3) Neuromodulation (brain stimulation). 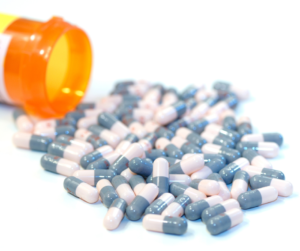 Antidepressant pharmaceuticals (TCAs, SSRIs, SNRIs etc.) aim to correct chemical imbalances in the brain that cause depression, by regulating the number of neurotransmitters. The treatment is given through oral tablets which are prescribed to the patient by a psychiatrist and taken at home. Antidepressants present with an efficacy rate of around 43% (NIMH, 2006), however the response is individual and may be different depending on which antidepressant is used. Antidepressants are generally considered safe. Common side effects are problems related to sleep, appetite, digestion, involuntary weight gain or loss, and sexual dysfunction. Antidepressants can also interfere with other medications and/or medical conditions such as pregnancy, which is why it is important to take them as instructed by your doctor. 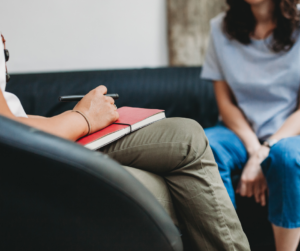 Psychotherapy (CBT, IPT etc.) is a talking therapy based on human interaction and psychological tools that encourage changes in behavioural patterns and ways to process emotions. The patient meets with a psychotherapist on a regular basis and is typically prescribed the treatment for 1-5 years. Psychotherapy can be combined with other treatments for depression such as pharmaceuticals or neuromodulation for a faster treatment effect. Psychotherapy is safe when used to treat patients of all ages, including children, as nothing is done physically to modify the body. However, as the psycotherapy treatment response is estimated to be slow, it is not suitable to be used as a monotherapy in severe depression. Furthermore, psychotherapy is very resource-heavy, and so in Western countries only 5 out of 100 people receiving medication also receive psychotherapy (Official Statistics of Finland, 2016).

Neuromodulation refers to brain stimulation techniques that aim to restore balance in the brain through electricity. A technical device and electrodes are used to apply stimulus to an area in the brain or body in order to affect the activity of certain nerves. Neuromodulation can be invasive or non-invasive. 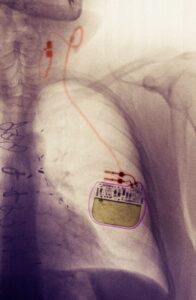 In non-invasive neuromodulation, the device and electrodes used to stimulate the chosen areas of the brain are externally fastened on the skull. To treat depression, Electroconvulsive therapy (ECT) and Transcranial magnetic stimulation (TMS) are the most used methods until now. Transcranial direct current stimulation (TDCS) is a relatively newer stimulation method to treat depression, and is the method used by Sooma Therapies.

Electroconvulsive therapy is a non-invasive neuromodulation method that uses a strong electric current to induce an epileptic seizure with the aim of resetting the normal biological balance in the brain. The current is given using electrodes externally placed on the head, while the patient is under general anaesthesia and supervised by a clinician, anaesthesiologist, and trained ECT-nurses. Results are generally seen after approximately 2 weeks of treatments (approx. 6 sessions). ECT is generally considered safe, with the biggest risks being anaesthesia related. However, there is a risk for memory loss and cardiac arrest. Common but non-serious side effects of ECT include confusion, nausea, headache, and jaw and muscle pain. 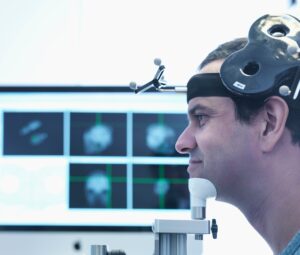 Transcranial magnetic stimulation is a non-invasive neuromodulation method that uses magnetic pulses to create electric current in targeted areas of the brain. The current affects the brain by stimulating nerve cells to discharge communicative signals inside the brain tissue. TMS treatments are administered by using an electromagnetic coil and must be performed at a hospital under the supervision of a clinician. The treatment consists of 20-30 visits to the hospital during period of 4-6 weeks. TMS is regarded safe, however, there is a slight risk for seizures, which is why supervision by a clinician is required. Non-serious side effects include discomfort during stimulation, headache, light-headedness, and hearing loss.

Transcranial direct current stimulation is a non-invasive neuromodulation method that uses a weak electric current to stimulate targeted areas of the brain. The stimulation increases or decreases (depending on aim) the likelihood of nerve cells to discharge communicative signals. In tDCS, the current is delivered to the brain from a small, portable battery-driven device via two electrodes. A treatment course involves 10-20 sessions over the course of 2-4 weeks. TDCS is regarded as a safe treatment method and does not cause any serious adverse effects. Non-serious side effects include mild headache, an itching sensation on the stimulation area, and redness of the scalp. TDCS can be used as a stand-alone therapy or as a maintenance treatment to retain the effects after acute treatment with either ECT or TMS. As the treatment is is safe and there are no risks or serious side-effects involved, it can be performed either at a clinic or safely at the patient’s own home. 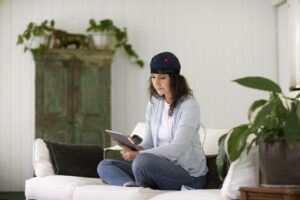 TDCS is the treatment method offered by Sooma for depression in the form of Sooma Depression Therapy , indicated for Major Depressive Disorder. Sooma has been working closely with leading neuromodulation experts to develop this treatment solution for depression. Sooma’s latest outcomes (Sooma, 2019) showed a 61% response rate, and 20% remission rate on a sample of 302 patients.  Additionally, they showed that in a total of 4022 treatment sessions, there were no serious adverse effects.

Do you want to know more about Sooma Depression Therapy?

Our dedicated team will answer any questions that you have, and, if you wish to proceed, they will help you get started with Sooma Depression Therapy at your clinic or hospital!