During the last 20 years, the efficacy and safety of transcranial direct current stimulation (tDCS) in various indications have been studied. One of the most studied indications is Major Depressive Disorder (MDD), for which the efficacy and safety of tDCS has been proven through much research: The latest meta-analysis, reviewing ten randomized clinical trials (RCTs) with a total of 455 patients, demonstrated the superiority of active tDCS to sham in both response rate and remission rate.

Here is a snapshot of what follows:

You may also download this article as a PDF. Supplementary materials are only available online.

Sooma Depression Therapy uses transcranial direct current stimulation (tDCS) to modulate brain activity of the areas affected by depression. It is an effective and well-tolerated treatment option for patients with depression. Sooma Depression Therapy can be prescribed as a monotherapy, or it can be added to pharmaceutical or psychosocial treatment options.

Ten clinics worldwide have provided treatment outcomes from patients administered with Sooma Depression Therapy. The outcome data reflect how the treatment is applied in clinical practice today. Moreover, it shows what can be realistically expected as a treatment outcome. The data includes both unipolar and bipolar patients. 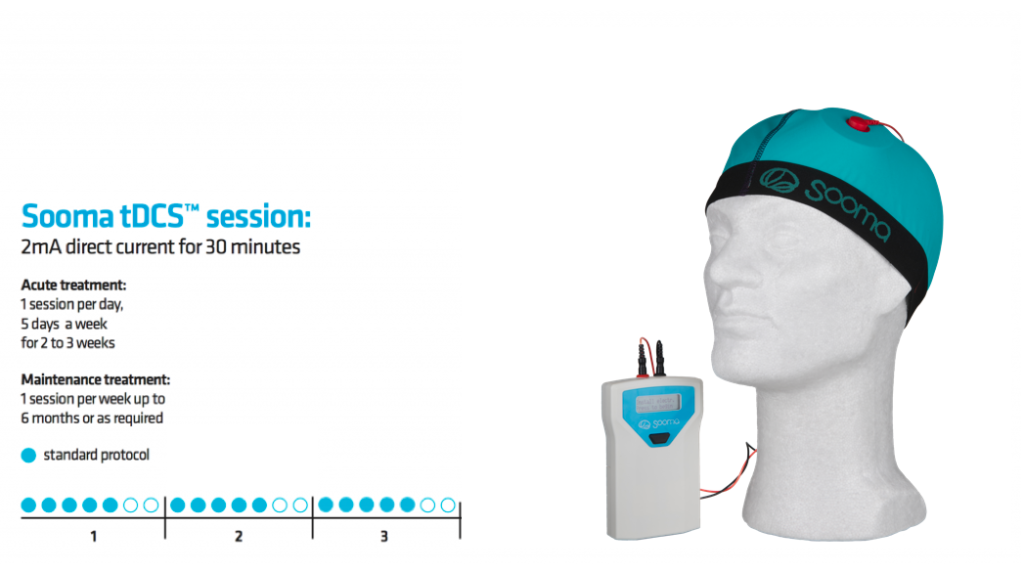 Figure 1: Sooma Depression Therapy. The Sooma tDCS medical device consists of a small, battery-powered stimulator, electrodes with conductive medium, and a head cap ensuring correct electrode positioning. Each session delivers a constant current of 2mA for 30 minutes, which is repeated each weekday for 2 to 3 weeks. After the acute treatment phase, the sessions can be continued once a week for up to 6 months for maintenance.

Outcome data from a total of 302 patients was provided by ten clinics worldwide. 259 patients completed the treatment (146 females) and were included in the analysis. 43 patients were excluded from the analysis. Reasons for exclusion were: lack of effect (12), missing data in patient forms (12), patient’s own request (6), no ongoing depressive episode (2), treatment of other medical conditions (2), too many missed treatment sessions (4), unreported reasons (4), and side-effects (1). Patient ages ranged from 17 to 82 years old. The majority of patients received the treatment as an add-on (199 patients) while undergoing simultaneous pharmaceutical and/or psychosocial intervention. Of the 199 patients with simultaneous treatments, 184 had at least one antidepressant medication. 60 patients had no other ongoing therapies and 75 had no antidepressant medication.

All patients were treated using the standard Sooma Depression Therapy protocol shown in Figure 1. Each patient received stimulation sessions with Sooma tDCS: 2mA current amplitude, 30-minute session duration, electrode size 35cm2, and bifrontal electrode positioning (anode and cathode on F3 and F4, respectively). Clinicians were allowed to adjust the number of treatment sessions according to patient need. There was no control group.

The treatment course was completed by 259 patients (146 females). 43 patients (14%) dropped out before the end of treatment.

Twelve patients dropped out for lack of perceived effect, two patients were referred to ECT and four patients missed too many sessions. Two patients wanted to discontinue after feeling more anxiety, one due to worsening symptoms and one patient after an undefined side effect. There was no dropout reason given for four patients.

The treatment period varied between two (10 sessions) to three weeks (15 sessions), and was decided by the medical professional for each patient. 76 patients were treated for two weeks, and 185 patients were treated for three weeks or more. In some cases where a twohttps://soomamedical.com/wp/wp-admin/edit.php-week period had been decided, there was an extension to three weeks to improve response. After the acute treatment, 0-10 maintenance sessions were administered in weekly or bi-weekly basis. On average, patients received 15.1 treatment sessions in total. Overview of the patient demographics is shown in Table 1. 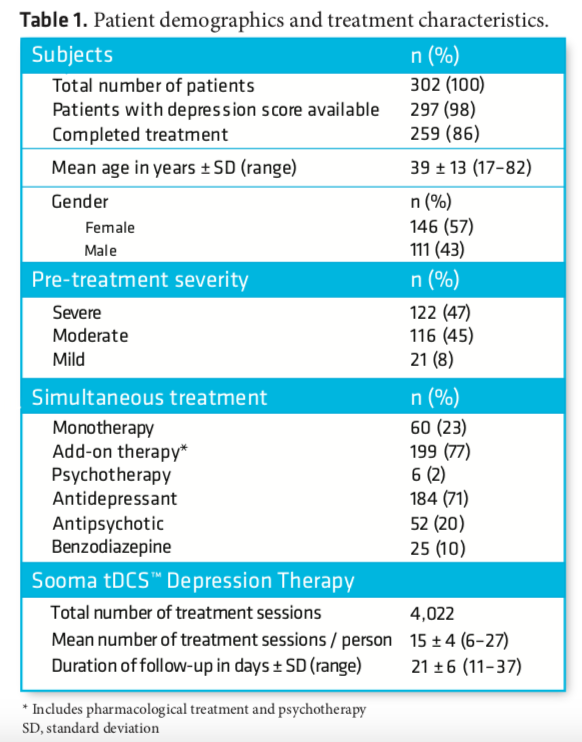 The majority of patients experienced a marked improvement as a result of Sooma Depression Therapy. 158 patients (61% of all patients) responded to the treatment and 51 patients (20%) achieved complete remission.

Figure 3. Depression severity before and after treatment. On average, patients had severe depression when starting the treatment and ended up with mild depression after completion of treatment.

Fifty-two patients (20%) had antipsychotic pharmaceuticals during Sooma Depression Therapy. Notably, use of antipsychotic medication increased the dropout rate from 16% to 29%.

Twenty-five patients had ongoing benzodiazepine medication and 9 were treated with Zopiclone. Use of benzodiazepines did not affect response rate.

Beyond the change in depression score, patients and nurses were encouraged to describe the experienced effects. Decreased anxiety was the most commonly described effect aside from mood improvement. Several patients reported increased activity and better functionality in daily life. Normalised appetite and sleep patterns were also among the effects reported. Notably, positive self-experienced symptom improvements did not always correlate with significant improvement in depression score. 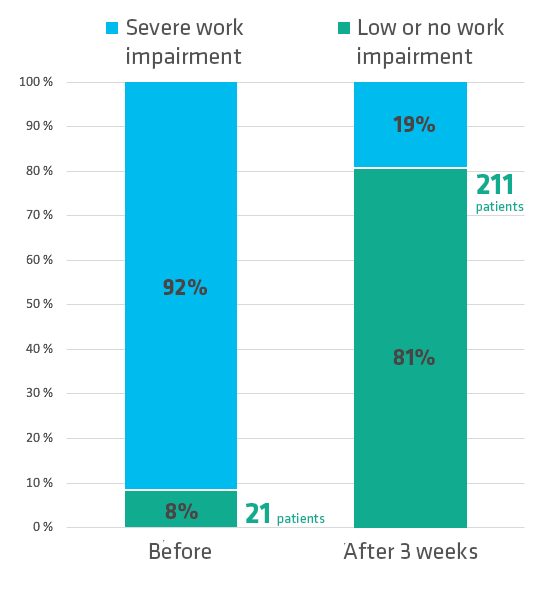 Sooma Depression Therapy is safe and was well-tolerated by patients. The 259 patients who completed the treatment received 4022 treatment sessions and over 2000 hours of stimulation in total. Most common side effects were itching sensations under the electrode during treatment session (54 % of patients reported at least one itching occurrence during treatment phase) and transient headache (27 %). The dropout rate was 14%. One patient discontinued the treatment after expressing a side effect. Two cases of mania or hypomania were reported, but they did not result in discontinuation of treatment nor did they require any kind of medical intervention.

Based on 302 patients reported by ten different clinics, Sooma Depression Therapy is a safe and effective treatment for patients suffering from major depressive disorder. The treatment is well tolerated and can be effectively administered either as monotherapy or as add-on treatment. Moreover, there were no technical issues in administering Sooma Depression Therapy in clinical routine use.

How to get started

Sooma Depression Therapy system is portable and does not require fixed installation or specialised facilities. The treatment session can be administered by a trained nurse in a clinic, or by the patient in a home environment. The treatment is easy to combine with psychotherapy or group therapy. Preparations take only a few minutes and the patient is free to engage in normal activities during the session. Sooma will train you and your staff in the use of the system and in how to deliver further training to your patients.