Transcranial direct current stimulation (tDCS) is a noninvasive neuromodulation technique used to treat a number of psychiatric and neurophysiological conditions. It uses a weak electric current, delivered to the brain from a usually small, portable battery-driven device. The stimulation area depends on what condition is being treated. 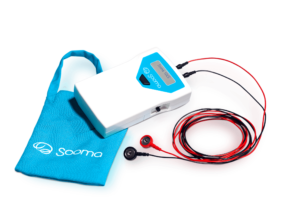 TDCS as a technique has its origins in early experimental studies on electricity with both animals and humans. In the 1960s, studies were conducted specifically on the neuronal effects of applying electricity to the brain, and it was discovered that mild electrical stimulation could modulate brain function by changing cortical excitability. The technique was named tDCS (transcranial direct current stimulation) in the 1990s, and for the past three decades, many studies have been conducted where tDCS has been applied to various psychiatric and neurophysiological conditions, such as depression, anxiety, schizophrenia, OCD, addiction, and different types of pain. 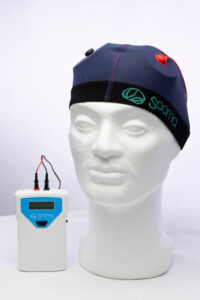 In tDCS, a weak current is used to stimulate targeted areas of the brain. The strength of the current is usually between 1 to 3 milliampere, with 2 milliampere being the most common when the treatment is clinically applied. The current travels from a small, portable battery-driven device to the brain via two electrodes; one anode, which is positively charged, and one cathode, which is negatively charged. The electrodes are positioned on the head using the 10-20 system commonly used in Electroencephalography (EEG) monitoring.

A treatment session usually lasts for 20 minutes, but can last up to 40 minutes. Sessions are often repeated to achieve a cumulative treatment effect. When behavioural changes are targeted, the session is repeated daily for several weeks or even longer in treatment protocols that aim to maintain a current condition. Aside from a short ramp-up and ramp-down at the start and end of the treatment, the current stays level throughout the treatment session.

What happens in the brain?

How can we see the effects?

The fact that brief polarising currents can cause long-lasting after-effects on a rat brain was shown in-vivo already in the 1960s (Bindman et al, 1964). The polarising current influences neuronal excitability and modulates spontaneous neuronal firing rate during and after stimulation.

In humans, this effect has been demonstrated both directly and indirectly:

The immediate effects of tDCS are associated with changes in membrane potentials through voltage-dependent ion-channels. These can be diminished by blocking calcium- or sodium channels (Nitsche et al, 2003). The after-effects, while also reliant on membrane polarisation, are shown to be associated with NMDA-receptor function and the concentration of GABA neurotransmitters (Nitsche et al, 2006; Stagg et al, 2009). These effects translate into behavioural changes over repeated stimulation through functional connectivity and neuroplasticity (Jackson et al, 2016). The changes in neuroplasticity caused by tDCS are reported to involve several neurotransmitters such as dopamine, serotonin and acetylcholine. (Nitsche et al, 2006; Monte Silva et al, 2009; Kuo et al, 2007) 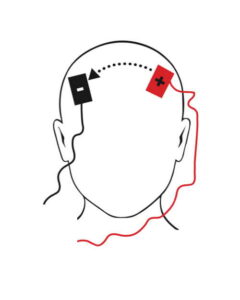 In pain, tDCS is used to target the brain areas responsible for processing pain signals. The neurons in these areas use action potentials to communicate with each other and form neural circuits. According to Fregni et al (2020), recurring pain causes maladaptive neuroplasticity, which leads to a persistent sensation of pain, known as chronic pain. TDCS enables modulation of the maladaptive neuroplasticity and neuronal networks. Positive stimulation of areas C3 or C4, located in the primary motor cortex (M1), has been shown to reduce pain by enhancing the activity in these neural circuits. Excitatory stimulation is applied to M1 with the anode positioned on the opposite side of the pain (C3 or C4). A cathode is placed over the contralateral supraorbital area (O1 or O2, opposite side to the anode) to form a desirable electric field over the area being stimulated (M1). According to Lefaucheur et al (2017), excitatory stimulation to M1 enhances activity in the precentral gyrus, where the neuronal circuits connect to structures that are involved in the sensory and emotional parts of processing pain.

To get a quote, use this form to contact us.

For a more extensive look at tDCS, you may take a look at the comprehensive overview presented in this practical guide to tDCS.

Solving the most common pitfalls of tDCS therapies

Focusing on Mental Health as your home becomes the workplace

With the COVID-19 pandemic causing another immediate shift to remote working, employees have been trying to readjust. Working from home…

Over 300 million people suffer from severe depression worldwide – equivalent to more than half of EU population. Depression is…