During the last few years, transcranial direct current stimulation (tDCS) has become a well-researched and established treatment option for major depressive disorder. We have collected the latest data from patients who have been treated with the Sooma Depression Therapy and studied the outcomes. If you’re interested in tDCS as a possible depression treatment option, keep reading!

The majority of subjects (91%) got some level of depression score improvement: 59% of patients experienced some treatment response and 18% achieved complete remission. The average improvement was 49% after at least two weeks of treatment. Overall, the patients tolerated the tDCS treatment well. Some mild side-effects were observed, but no serious adverse events occurred.

Ten clinics in different locations provided treatment outcomes from patients administered with Sooma Depression Therapy. The outcome data reflect how the treatment is applied in clinical practice today. Moreover, it shows what can be realistically expected as a treatment outcome.

Outcome data from a total of 227 patients was provided by ten clinics worldwide. Data from 191 patients (out of which 54% are females) was included in the analysis after eliminating subjects who did not have a depression score and those who discontinued the treatment. There was no control group. Patients’ average age was 39,9 (SD 12,8).

The baseline severity of depression varied. 52% patients had a severe condition, 40% — moderate, 6% — mild. The majority of patients (140) received the treatment as an add-on while undergoing simultaneous pharmaceutical intervention. Among the patients getting simultaneous treatments along with Sooma, 127 were also using antidepressants, 41 — antipsychotics, 19 — Benzodiazepine. 26% patients had no other ongoing therapies.

The reporting clinics represent different levels of care providers. The clinics used their preferred depression scale when reporting baseline and end-point data. We defined treatment response as a 50% decrease in the depression score. Remission was defined by the grading guideline of each depression scale.

The treatment took 15,1 sessions on average: for 32% patients the therapy lasted for 2 weeks, for the rest — 3 weeks or longer, and clinicians could adjust the number of treatment sessions if they felt the need. All patients were treated using the standard Sooma Depression Therapy protocol shown in Figure 1. The stimulation sessions with Sooma tDCS are as follows: 2mA current amplitude, 30-minute session duration, electrode size 35cm2, and bifrontal electrode positioning (anode and cathode on F3 and F4, respectively). 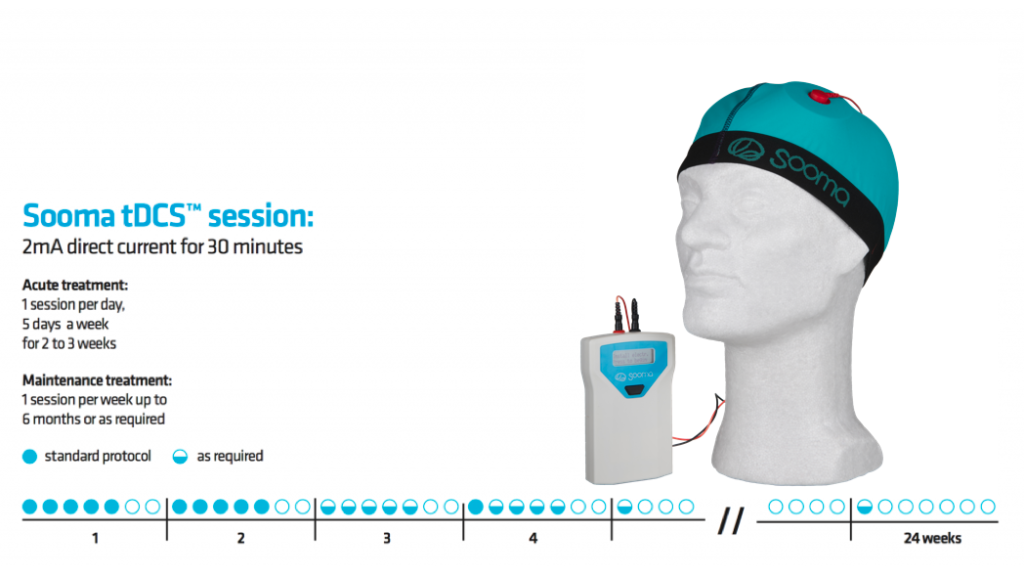 Figure 1: Sooma Depression Therapy. The Sooma tDCS medical device consists of a small, battery-powered stimulator, electrodes with conductive media and a head cap that allows correct electrode positioning. Each session delivers a constant current of 2mA for 30 minutes, which is repeated each weekday for 2 to 3 weeks. After the acute treatment phase, the sessions can be continued once a week for up to 6 months.

The majority of patients experienced a marked improvement as a result of the Sooma Depression Therapy.

86% of the patients achieved partial response, the response rate was 59%, and the remission rate was 18%.

Depression severity before and after treatment

After completing Sooma Depression Therapy, 79% of patients had either mild depression or were in remission. 13% had moderate depression, compared to 40% before starting treatment.

After completing the treatment, only 8% were still suffering from severe depression, compared to 53%before starting treatment.

No serious side effects were reported. However, some patients faced adverse outcomes of the treatment such as skin sensitivity, headache and hypomania. 58% subjects reported itching, 13% — burning sensation, 15% noticed redness once. 27% experienced headache once. 2 patients experienced a hypomanic episode.

Get in touch with us at https://soomamedical.com/contact-us, and subscribe to our newsletter to stay updated on tDCS treatments.